During my week in Ontario, debuting SARNIA BOYS in Windsor, Sarnia, and Toronto we took some time to video another original tune, "To Be True". Dave Puzak and I were joined by Running Red Light's bassist, Jeff Carter, (and honorary Sarnia Boy). Here it is:

We've got more new songs in the works. Meanwhile, check out a couple of our lyric videos on our Sarnia Boys Video Page. And sign up on our mailing list while you're there!

My new long distance project, Sarnia Boys, is so much fun! David Puzak and I have been writing and recording and getting ready for our live performance debut in - where else - Sarnia Ontario on Nov. 18th. And followed the next night in Toronto at C'est What?. We met when we toured together, Dave with Toronto's Running Red Lights, and me opening solo/acoustic on the tours.

Our second single is called "Are We Falling Apart". Dave wrote and recorded the bed tracks, and I wrote the words and melody, based on what he sent me. Have a look at this lyric video for the song:

Are We Falling Apart from The John Pippus Band on Vimeo.

The lyric video was made from an artist I found on a site called Fiverr.com. This site offers all sorts of services, from logo design, to editing copy, and a lot more. Check it out for a low cost way to market your product, whatever it might be.

I've been doing some online collaborating with a guitarist/producer friend in Toronto, David Puzak. We met a few years back when we toured together. He's in a Toronto-based band called Running Red Lights. He's been sending me music ideas and instrumental tracks and then I've been writing the lyrics and recording the vocal. We've got four or five songs in the works, the first one is finished. It's called "I Found You Out".

Visit the new Sarnia Boys site for more info. We're playing a few dates in Toronto, and of course Sarnia in mid November.

I played at a venue in Vancouver's historic area, Gastown, last night. At a place called Guilt and Co. I was opening for a young singer/songwriter from Nashville/Seattle named James Ross. My set was fine. I used my foot stomp pedal for the first time. I find I can keep time best with the stomper when I'm doing fingerpicking tunes. The alternating thumb picking helps to lock in my foot tapping. 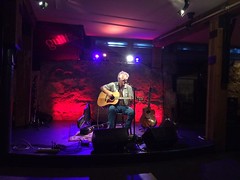 The only down side was that the headliner's car was broken into in the parking garage where they had parked. The thief (probably drug addicted, probably battling mental health issues - based on the stats anyway) smashed the rear window and grabbed a back pack that had two lap tops in it, some cash, and other stuff worth about $5,000. It's hard enough being a touring musician without having this kind of stuff happen.

Out of the blue this Facebook message arrived last night: Hi John - Mike Kappus here. I represented JJ Cale for 30 years and now help with his estate. I wanted to let you know that we (including Cale's wife) enjoyed your version of Cale's "Call Me The Breeze" so we have today posted it on Cale's official Facebook page - Wanted to make you aware and Thanks!

Of course I'm blown away. The "shares" and "likes" are through the roof. You always hear about the music biz being cold and heartless, but every once in a while something like this happens and it sure feels good. Besides his work with Cale, Mike Kappus managed John Lee Hooker for many years, he handles Don Van Vliet's (aka Captain Beefheart) estate, and has worked with everyone from Charlie Watts to Van Morrison to Bonnie Raitt and on and on.

I'll be playing two nights at The Blue Marlin in Port Alberni with my four-piece band, the last weekend in June (see my "shows" page for details). It'll be a mix of classic rock and blues covers, and originals too. All dance floor-friendly. And then the next day, Sunday June 26th, for a complete change of pace, I'll be playing a solo/acoustic garden concert, also in Port Alberni. This is a benefit for a local arts project and will be at the home of the late artist Robert Aller. I've written a song for the occasion to commemorate his life as "an artist, a teacher, and a man".

I've been back from the Netherlands for just over a week now and I'll still buzzed from the warm reception I received. Three weeks of shows in a range of venues, from blues bars to afternoon concerts and everything in between. My Dutch band with Pim Bouwens on percussion and Rick Brobbel on bass was such a treat to play with. This was my third trip over there and each time it just gets better.

Here's a video from the last show in Veghel. This was an old converted factory that is now a cultural centre. It was a large venue, packed, and the crowd was ready for a good time .

Based in Gainsville, Georgia, Rust Magazine has been a big supporter of my music over the years. Now, they've kindly posted a short write up on their site.

Also blues DJs around the world are picking up on the single. Airplay in England, Holland, Denmark, Australia, and here in Canada so far!

It's also on my music page at Bandcamp and coming soon to iTunes, Amazon, and more. You can buy the limited edition USB stick (that is shaped like a mini-45RPM record) only at Bandcamp.

It's hard, it's not easy. Getting heard that is. Everybody and their dog, it seems, is busy unleashing new songs out into the digital world. And I'm no different. So you have to spend time on your marketing, come up with creative ideas - a story - to go along with your release.

To that end, today I'm releasing two songs, digital only, but on the World's Smallest 45 RPM. It's really a USB drive, designed (by me) to look like a 45 RPM record. The stick contains:"Bring Me Some Whiskey" a blues original, and "Stop Breaking Down" my version of a Robert Johnson classic. Also the cover art, liner notes, and lyric. I recorded both songs with Michael Schau at Axis Productions Studio in Gastown.

Already I've had airplay on blues shows in England (thanks Cliff), The Netherlands (thanks Jan), Australia (G'day Irene) and on Nanaimo's CHLY (thanks Brad). And lots more to come with radio promoter Bryon Tosoff letting more blues DJs around the world know the songs are available. Click HERE to listen to the two tracks and get your own limited edition World's Smallest Digital 45. Lots of work, but hell, it's fun.

I wrote a song called "Bring Me Some Whiskey" not long ago and recorded a live version at Char's Landing in January. It's on my "video" page. As with most of my songs, particularly the blues tunes, I found a groove and then added some words that fit. In this case I found (ok, stole) the groove from Keith Richards in an interview I saw online. The whole interview is fabulous, Keith is his usual ebullient, roguish self. Towards the end he rips off the low string on this acoustic guitar the interviewer has with him, tunes to his famous open G tuning, and then noodles around a bit. It's in the noodling that I heard the part that inspired me to complete a groove. If you go to the 14 minute mark you can see what I'm talking about.

The video for "Bring Me Some Whiskey" was shot and edited by Jenny Fortin of Yellow Rose Media. It was shot at Char's Landing in Port Alberni, the day after I played a concert there. Have a look at my take on Keef's riff and tell me what you think.

Getting excited for my upcoming tour to The Netherlands. Leaving at the end of March for three weeks of shows. See my "shows" page for when and where.

This will be my third tour there in four years. Direct flight from Vancouver to Amsterdam. I'll be staying, as always, in Dordrecht, about an hour's drive south of Amsterdam. My b and b is only $25 euros a night. Basic but all I need. There's a park nearby where I can run in the mornings. The centre of town is a fifteen minute walk away. The Saturday morning market in the main square is always a highlight. Looking forward to hanging with my Dutch friends. They know how to hang.

I recorded a song called "I'm A Runner" back in '08 with Winston Hauschild producing. It's all about my passion for running (duh). Recently I submitted the tune for a compilation CD being produced and sponsored by the charity Music Heals. They are holding an 8KM run and giving the album to anyone who donates to the cause. "I'm A Runner" was selected and is in some fine company. Other tracks are by Delhi2Dublin, Bend Sinister, Derrival, and more. Check out the album and more about Music Heals here. Donate $5 or more and get the album!