As some of you know, I've been a singer with a touring group this past year. It's called Relive The Music: 50s and 60s. Besides the six singers, we perform with a five-piece band, and two dancers. We travel with our own sound person as well. Our first show was in March in Campbell River. It was seat-of-the-pants, eyes-wide-open, but we got a standing ovation. In fact, EVERY performance since, has resulted in a standing ovation, knock on wood. Our final show of the year, (Show Number 18) was in North Vancouver in November, playing to a sold-out house of 650 people. What a treat being signed up with a first class production: transportation, food, accommodations - all provided along with a decent paycheque. And large, enthusiastic crowds all along the way.

Coming up next year we'll be doing a tour of Northern BC in March, a tour of Southern BC, Alberta, and Saskatchewan in the fall, as well as playing a few dates around Vancouver and the Interior. We will also go back to where it started - Campbell River in November.

I got an email this morning from my old friend Glenn Hodgins. I met him years ago when I lived in Montreal for two years in the early 70s. We shared a lot of "moments" let's say, back in the days of our youth. For a time, we lived together just a block off St. Catherines, near St. Laurent. For many years Glenn has lived on a farm about an hour's drive south of Montreal. He does all sorts of interesting things there. He and his wife Francis have four grown children, and they are all living interesting lives too.

Glenn has been flying drones for several years. He asked if he could use my song "Little Things" from my first album ("This City" 2009) as the soundtrack for this short film showing the capabilities of his new little camera he's got that attaches to his latest drone. I haven't played this song for awhile, nice to hear it again, and see it "take flight".

In the video you can see his daughter skating on the pond he made using his heavy equipment. You see the old stone house with the solar panels, and beyond that, his maple bush. This coming February will be his 39th sugaring season for harvesting and canning his maple syrup. Here's to having friends that have been in your life a long time.

We're back on the Island next weekend. Three dates including Port Alberni, Victoria, and Duncan. I get to sing lead on songs I grew up with... The Great Pretender, Put Your Head On My Shoulder, Runaround Sue, Sherry, and more! And then there are the duets: My Girl, You've Lost That Loving Feeling, and, wait for it... Satisfaction! I get to channel my inner Mick on that one.

All the venues have their own charm and history. And in some cases peculiarities. Like when the dressing rooms are located down the stairs, down hallways, left, left, then right and suddenly you're in the middle of that scene in Spinal Tap. Can't wait to play the Royal Theatre (built in 1913) in Victoria next Saturday. Look at this stage:

My Victoria cousins are coming to this show, so that will be a treat for me. Ticket info for all three Island venues on my "shows" page.

Autumn begins and Relive the Music is back. The first shows were this past weekend in Penticton and Oliver in the Okanagan Valley. In early October we are playing three dates on Vancouver Island including the historic Royal Theatre in Victoria. Two new cast members (Eli Williams and Scott Walters), some song changes, and more choreography have made this season different from the last.

See my "shows" page for details on where and when we'll be playing next. The musical journey continues...

The post below aside, there are a few things going on this summer to tell you about. I just got back from a few solo shows on Vancouver Island. I also led a songwriting workshop at Char's Landing that was well received and a lot of fun to do. Speaking of which, I'm going to be teaching a 12-week songwriting course at Songster Studios here in Vancouver, starting Sunday August 11th. I love teaching, and this is right up my alley. Still room in the class if you want to sign up. 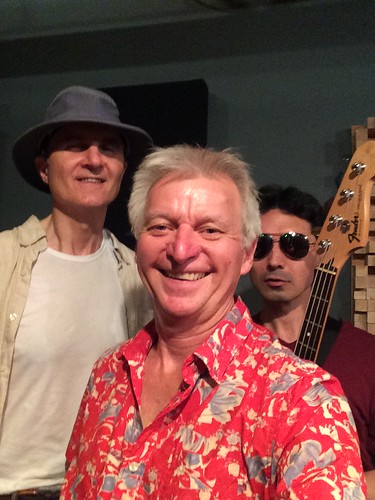 Here I am at the rehearsal yesterday with Wes Skakun (drums) and Marq DeSouza (bass/vocals). We're playing at the Libra Room on Saturday Aug. 3rd. See my "shows" page for details. Also, Marq and I are playing from noon to 2pm on Thursday on the plaza at the Roundhouse Community Centre. Playing under sunny skies. Come on out, if you're in the 'hood.

Other than a few gigs this summer (see my 'shows' page), I'm kicking back. I'm taking it easy, enjoying the weather, my family, and hanging with friends. I also confess to feeling like I've been spoiled by the latest gig of being a singer with Relive the Music. It's a lot easier to just show up and sing and not have to deal with booking, touring details and promo, taking care of the sound, accommodations, band details, etc.

I subscribe to Jane Siberry's newsletter (I hosted her at a house concert early this year). She's just finished a six month international tour and this is what she has to say about "down time":

FOR ARTISTS, WRITERS, ACTORS, MUSICIANS AFTER INTENSE FOCUS for those who have been to the pop-up 'creativity workshops' along the tour and heard me speak about it - yes, i am prepared for a period of re-calibrating (ie. feeling out-of-sorts) as the system adjusts in its wisdom. so don't think you're crazy, just let the time go by and don't take it personally.

I find those words very apt to where I'm at these days. I'm just letting the time go by and not worried about it.

A fun moment during the show. Andrew, Steve H., and I take turns trying to "out Elvis" each other. Steve H. wins everytime (not shown here). 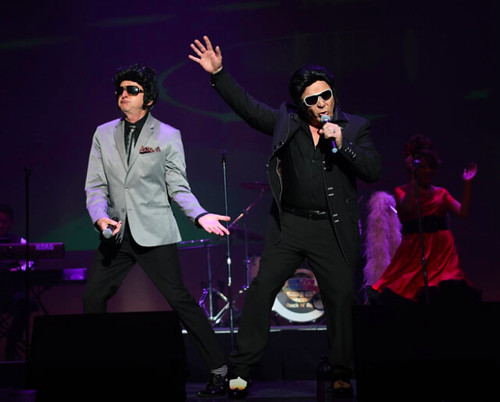 Here I am performing Chuck Berry's "Johnny B. Goode". This tune is a real crowd pleaser, so much energy. Kim Mendez on guitar really drives this tune, inspiring us all to go for it. 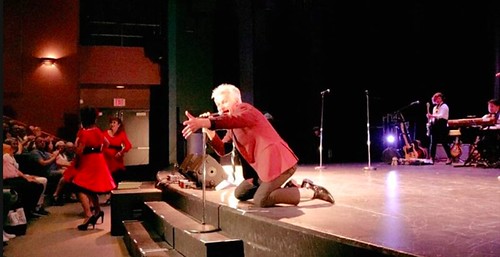 See you in September, starting in Oliver BC at the Venables Theatre.

Here we are, a couple of weeks ago, before the last show of the season at Chief Sepass Theatre in Fort Langley, BC.

We get the summer off, back in the Fall starting off on in the Interior for three dates, then an Island tour, and more dates around the Vancouver area. See my "shows" page for details. 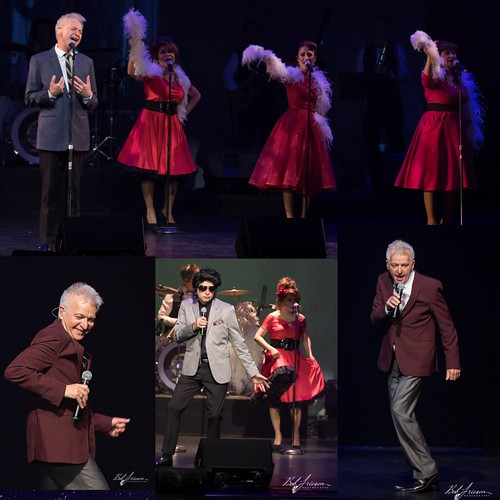 Does it look like I enjoy performing? I thought so. My brother Tim Pippus asked his photographer/friend, Bob Friesen to come to the show on the weekend and get some shots of me doing what I do. Bob's day job is as the news photographer for the the local newspaper in Mission. The Elvis medley features all three of us male singers competing to be the best "Elvis". It always gets a laugh. The photo on the top is me doing "The Great Pretender", originally a hit for The Platters.

The guitarist with the Relive The Music band is Kim Mendez. As a fellow guitarist, I particularly appreciate her approach to the craft. She's hardworking, methodical (always practising), thoughtful and precise in her playing. She brings five or six guitars to every rehearsal, every gig. Her pedal board has so many choices, another indication of her attention to sonic details. 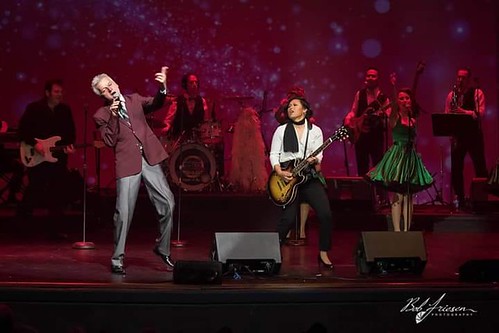 Photo by Bob Friesen, taken this past weekend at The Clarke Theatre in Mission.

Rehearsing with Andrew and Steve, April 3, 2019 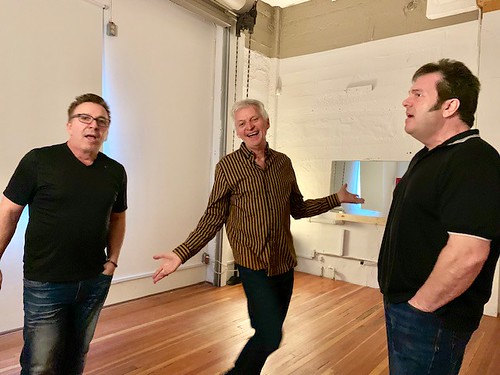 When I got hired for this gig, I told them I don't sing harmony and I don't do choreo... But that went out the window early on. I'm not good at it - thank god I know how to sing lead - but I do what I can. Here we are getting our Beatles' medley in shape. Next show is on Saturday at the Bell Centre in Surrey. Email me to get in the draw for two tickets (value $49 each)!

We rolled into Vernon on Friday afternoon, and performed that night for about 450 people at the Vernon Arts Centre, close to capacity. This was our fourth show (the first three were last weekend on the Island). We've moved things around in the second set to make costume changes easier. Added back one of the songs cut earlier for time. Still more fine tuning to do, but it's getting tighter. 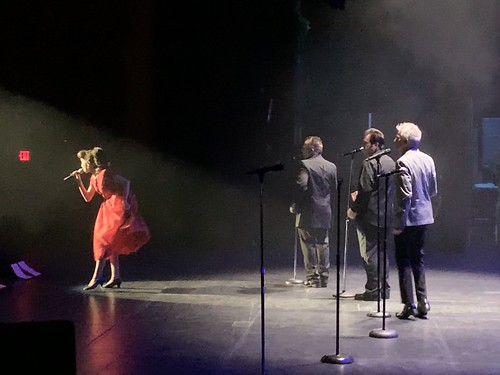 The next show is in two weeks in Kelowna. Only about 30 seats still available in the 850-seat venue! People are loving the concept, and now that we have performance photos and promo videos that will help sell the show as well. Lower Mainlanders, we're at the Surrey Bell Centre on Saturday April 6th. See my shows page for all future dates. 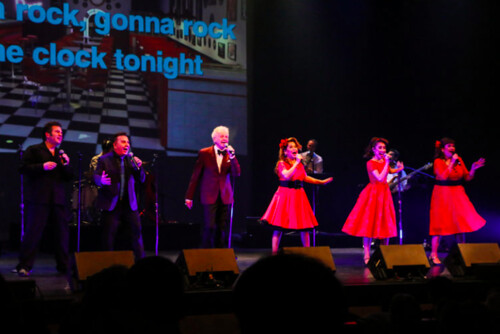 Our first three shows last weekend on Vancouver Island were a success. Near capacity theatres, standing ovations, and the show is now tested in front of audiences and being fine tuned. Next show this weekend in Vernon. Only balcony seating left.

In the photo, left to right: Steve Hillis, Andrew Slee, me, Luisa Marshall, Zenia Marshall, and Tota Mendez. Behind us are the five-piece band. We also have two dancers and we travel with our own soundman.

I'm singing lead on a dozen songs currently including Dion's "Runaround Sue", Jerry Lee Lewis' "Great Balls of Fire" and I WAS doing "Papa's Got a Brand New Bag" by the Man himself, Mr. James Brown, but it was cut for time, dammit. I've started a petition to get it reinstated, the band is totally onside with this. I'll keep you updated.

I'm so grateful to Steve and Luisa Marshall for selecting me from who knows how many applicants to be part of this troup. We have so much fun on and off stage. This show will go on for a long time, I predict. See my "shows" page for dates.